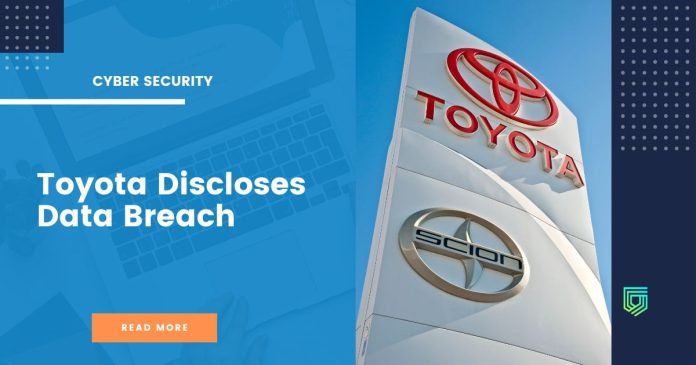 Toyota Motor Corporation disclose a data breach that may have compromised the personal details of its customers after an access key was made available to the public on GitHub for over five years.

The data breach at Toyota Kirloskar Motor, a joint venture with Indian giant Kirloskar Group, has been reported to the appropriate Indian authorities, according to Toyota India.

A Portion of T-Connect Site Source Code Published On GitHub

The car maker recently learned that some of the source code for its T-Connect website was unintentionally posted on GitHub. The report stated that around 296,000 customer information may have been compromised due to this issue.

The company built the T-Connect app, which gives car owners access to the infotainment system of their vehicle and allows them to keep an eye on who has access to it.

Along with the code, the data server access key that held client data such as email addresses and management numbers was also included. By a developer subcontractor, the source code was exposed.

“In December 2017, the “T-Connect” website development subcontractor mistakenly uploaded part of the source code to their GitHub account while it was set to be public, in violation of the handling rules”, according to the notice published by the company.

“This incident was caused by the inappropriate handling of the source code by the development contractor company. We will proceed”.

According to the news, between December 2017 and September 15, 2022, an unauthorized third party might have had access to the information of Toyota consumers. 296,019 clients are affected, the GitHub repository was locked in September 2022, and the keys were modified.

Also Read: How to protect yourself and your customers

Although there are no indications of data theft, the Japanese manufacturer comes to the conclusion that it is impossible to completely rule out the possibility that someone may have accessed and stolen the data.

“As a result of an investigation by security experts, although we cannot confirm access by a third party based on the access history of the data server where the customer’s email address and customer management number are stored; at the same time we cannot completely deny it. We now have.” reads the notice published by the company.

Notably, the Company declared that it will apologize and notify each affected consumer separately. Toyota has set up a separate form for users to check if their data was exposed on its website.

Users of T-Connect who signed up between July 2017 and September 2022 may be subject to scams and other types of scams. The company advises customers to be on the lookout for such scams.

“If you receive a suspicious e-mail with an unknown sender or subject, there is a risk of virus infection or unauthorized access, so please do not open the attached file and immediately delete the e-mail itself. Please be careful when accessing the address (URL) described in the email”, reads the notice carefully.