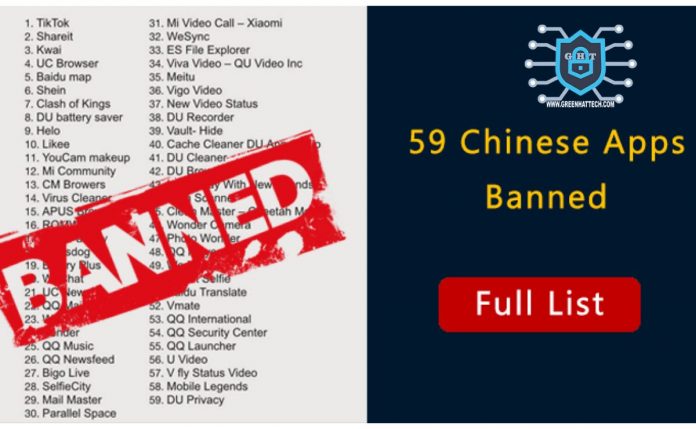 The Indian government has banned today 59 Chinese mobile applications on the grounds of national security, according to a government reads statement Ministry of Electronics & IT, India.

This comes after the Indian military clashed with Chinese forces in the region of Ladakh, in northern India, on June 15, this year. The clashes resulted in at least 25 Indian soldier deaths, and more than 70 injured.

The Indian government argues that the 59 apps have been used to collect data on Indian users, data that has been sent back to servers in China.

Indian officials said they believe the data has been mined and used to profile Indian users by “elements hostile to [the] national security and defence of India.”

The Indian Ministry of Information Technology, who authorized the ban today, said it received an “exhaustive recommendation” to ban the 59 Chinese apps from the Indian Cyber Crime Coordination Centre at the Ministry of Home Affairs.

It is currently unclear how the Indian government will proceed with the ban at a technical level. The apps are still available on app stores, and they are still working inside the country, at the time of writing this article. It is unclear if the Indian govt will ask app stores to remove the apps from their locale Indian stores, or if the govt will use local ISPs to block the app’s domains.

National-level app bans are usually incredibly hard to enforce. Russia has recently “formally” unbanned the Telegram app after a two-year ban, albeit, the app has never stopped working inside the country, with the Telegram team always finding new ways to bypass the Kremlin’s ISP-level ban.