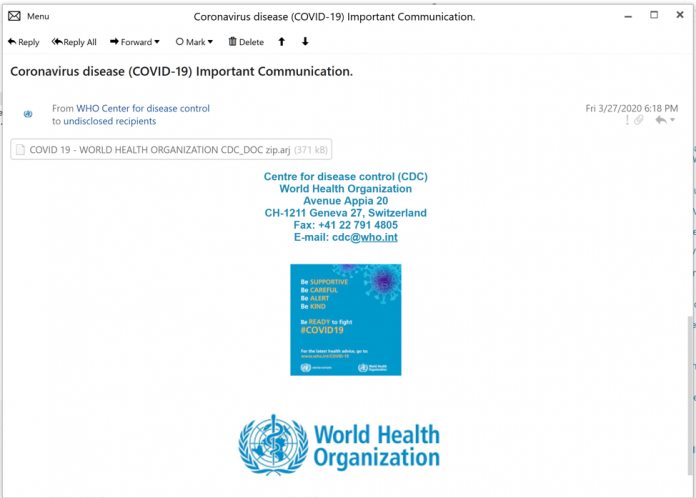 A new attack observed using COVID-19/Coronavirus-themed email appears to be coming from the WHO delivers the infamous Lokibot malware.

The compressed file is with the extension “Doc.zip.arj“, when decompressing in 7-zip the payload file “DOC.pdf.exe“, a method to trick the users hoping it is not an executable one.

The campaign was observed by Fortinet, once the executable (“COVID_19- WORLD HEALTH ORGANIZATION CDC_DOC.pdf.exe”) is opened the victim machine gets infected with the Lokibot malware.

Lokibot malware was first time discover in the year 2015, it is designed to steal information and data from the infected system.

There is news that The malware was also sold in underground hacking markets, it was initially advertised as an information stealer and keylogger, later it continues to enhance its capabilities.

Recently it was distributed using a powerful code injection technique to evade the detection, anti-analysis technique and disable the security tools that run in the target victims’ computer.

According to Fortiguard telemetry, the campaign found to be active since the end of March and it attacks the following countries.

In a recent attack campaign, Lokibot trojan malware used as a popular game launcher to trick users into executing malware on their machines.

Due to Coronavirus and lockdown internet usage increase 200% and this increased Cyberattack. and need awareness about cybersecurity and self-protection so that you can self your money and data.

Florence City | Pay $300,000 as Ransom After their System was Infected with Ransomware

What Does Giant Tech Know About You? Mainly Everything